Around two years ago, I woke up one morning and felt this very odd feeling or rather lack of normal sensation in my face. I went to the mirror and almost screamed at the grotesque version of myself staring back at me. One half of my face was drooping and off-kilter like I was made of candle wax and that side had been left to burn too long causing it to melt. I rushed to the ER terrified I had had a stroke which I assumed was the only cause of such facial paralysis. I was lost when the doctor told me I had something called Bell’s palsy and that it would go away in time which he elaborated would most likely be 6 to 8 weeks but could take longer. Basically, there was no known sure cause for this, nor was there a guaranteed treatment set or a set-in-stone time of recovery. I felt hopeless and my esteem plummeted.

The next few weeks were very trying. I experienced depression, isolated myself, cried often, and would not dare look in a mirror as it made me very close to suicidal. I had to quit my job because it involved talking all day on a phone and due to my twisted mouth; my speech at first was very unintelligible especially over the phone. My husband could barely understand me so we didn’t get to talk much. Since he spends weeks at a time out of town for work, this lack of communication made me panic and become fearful. I already felt so unattractive so my mind began to fear things happening in our relationship due to him being turned off by my looks etc. He was thankfully very understanding and very supportive despite my constant doubting etc.

I took a demonstration job that was a week long after explaining my face to the hiring manager and being assured they were okay with my look and understood my speech complications. I was shocked they actually hired me to do the demos as I figured they would just never get back in touch. A few days in I wished they hadn’t hired me. I was stared at, laughed at, called names (many that I can’t repeat out of decency), and utterly humiliated by so many people. People are very cruel to people that aren’t what we all define as normal. People who are that way should imagine the same affliction happening to someone they love or to themselves. It is not so funny when it’s closer to home! The worst though was how the store manager treated me. I expected the customers to do some of what they did but never expected such degradation from the store manager.

I was told I was not in compliance with the store’s dress code by a store manager when I was wearing the exact outfit they had approved for this brand I was demonstrating. Well, technically he made another employee tell me because he was too chicken to personally deliver the false reason he needed me to leave. This worker kept apologizing for me being treated so unkindly which told me it truly was about my looks, not a shirt that was exactly like another demo person’s shirt yet she wasn’t being told to leave. Apparently, the messenger felt so bad that he solved the attire issue by giving me a jacket to wear that is issued to all store employees for wear on the job so I wouldn’t have to leave and did this so knowing full well he was going to risk the ire of his boss. That man I still bless and give thanks to for doing that for me especially since it definitely angered the store manager. I saw him yelling after he realized there was no longer a valid reason he could use to expel the monster and then overheard him complaining to his employees that I would scare off customers with my Batman villain Two-Face appearance. I left then voluntarily and didn’t finish the job. I went home devastated but was soon determined to not be.

It took over a year for my face to get back to what is now only slightly off. I really thought it never would and slowly adjusted to living with it. I learned to talk clearer by speaking slower and choosing words when I could without certain consonants I had trouble enunciating. I crafted and wore eye patches I decorated to match my attire because my eye wouldn’t shut and dried out or was susceptible to harm from dust and debris. I made my own jokes and called myself Two-Face with a laugh because in doing so I took ownership of things I was going to be called regardless which took away a lot of the power to hurt me they formerly held. I began to stare back and would often tell people jokingly that I charge hourly for photos if they wanted more time for observation in an attempt to confront people for their rude behavior.

Now 2 years later I crafted and am wearing a DIY costume of Harvey Dent a.k.a Two-Face, the Batman character that horrible store manager likened me to in negativity. I chose the Tommy Lee Jones version because his character was less dark than others in the same role which fits me better (plus his outfit was something I saw would be easier to feminize). See what I told myself every day after that awful day at Central Market occurred is this: My face may look awful and be ugly but there’s always plastic surgery to fix it if need be. But an ugly and mean heart there’s no fix for other than trying to change it with your own love and laughter and kindness in counteraction. I could hate him for what he did and said but that fixes nothing. I choose instead to rise above, laugh it off and forgive him. I can choose to let my dark side rule my actions like Harvey allows Two-Face to take control or I can let my light be an example and guide for others out of their darkness instead. I may have two faces, but I can choose which face to put forward. 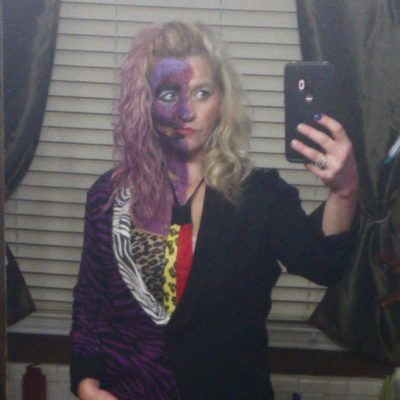