I made this Minecraft Ender Dragon costume for my 9-year-old son. My son loves Minecraft! He went as Steve last year and this year he really wanted to be the dragon.

If you are familiar with Minecraft, everything is made of blocks. Last year I made his costume out of cardboard so that he looked really blocky, but it was uncomfortable to wear. So this year I started with a custom-designed fabric. I designed the pixel inspired fabric in Photoshop using 1-inch squares of black, grey, and purple, and had it printed online. The Ender Dragon also has some light grey accents, so I bought some additional fabric of the same material in light grey.

I started with the jumpsuit. My son had an old costume that still fit him – it was just a little small. I deconstructed that older costume and used it to create a new, slightly bigger pattern. It worked out great! It was pretty easy to sew and fit him perfectly.

Next were the wings. I measured his arm, and the distance from his shoulder to the floor, and cut wings that could extend about 10 inches past his fingertips and fall just to the floor. The problem with most winged costumes is that the wings are too small – I wanted ours to be big! Each wing was constructed with a base of my custom fabric and details in the grey fabric to match what the Ender Dragon’s wings really look like. I sewed a dowel into the top to give some structure and something for my son to hold on to when he spread his wings. The wings were then attached to a sturdy piece that was made of 4 layers of felt, wrapped in the custom fabric, and stitched all around. I added elastic loops that went over his shoulders and under his arms so that he could wear his wings like a backpack. I wanted him to be able to take them off for school, or if he got tired of them.

Next was the head. I made the head out of cardboard and covered it in the fabric so that it matched the body and wings. Wrapping cardboard in stretchy fabric was difficult but once I got the hang of it, it wasn’t too bad! I built a false top into the roof of the head to accommodate lights for the eyes. The holes for my child’s eyes were actually lower, but the Ender Dragon’s eyes were up high. I covered those holes on the inside with purple theatrical lighting gel and then mounted small lights inside that I could turn on and off. The effect was glowing purple eyes!

Finally, I had to make the tail. I used 4×4 boxes that I found at a stationery store and covered them with the custom fabric. I strung the thick, black wire through the boxes to connect them and provide some structure. I attached the tail to my son with a belt that I made out of felt, fabric, and the overflow of wire. The wire fed through a channel I had sewn through the felt, providing the necessary structure and support. It closed with velcro in the front, so that he could take the tail off to sit.

My son loves his costume and we have received many compliments on it! 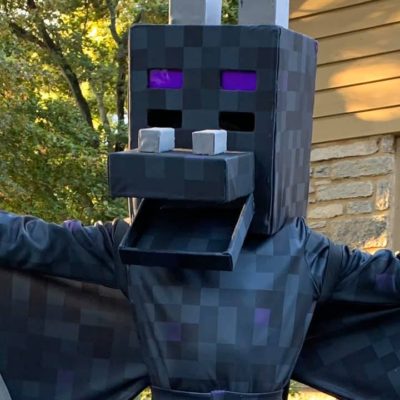 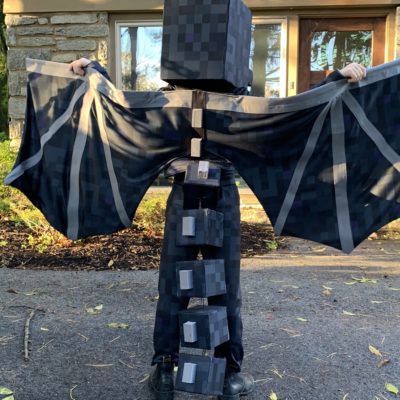 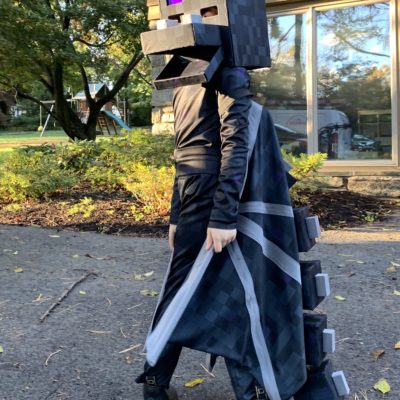