This trio makes up the entirety of the Video Team at our company. We share a passion for film, media, animation, AND… going overboard with fun ideas!

So a few months back, when “Spiderman: Into the Spiderverse” hit theaters, we were all completely hooked. Not only were the characters themselves inspiring, but this film epitomized what we love MOST about animation: the boundless opportunity to break the mold, to mix styles, to think bigger than reality… and make a REALLY good movie while you’re at it.

But all that said, this costume opportunity came together almost by chance. Over coffee at the office, I mentioned to my colleague Brandon how excited I was to take a shot at Spider Gwen cosplay one day (since she shared my haircut, face, personality, etc.)… at which point he revealed to me that he had just committed to being (Peter Parker’s) Spiderman for Halloween this year. Wide-eyed, we ran to Mithra, Video Team Homie #3, and asked if she would possibly at all be interested in maybe joining us as the one and only Miles Morales… and so the plan was born.

For Peter B. Parker, Brandon pulled together his iconic “slap-dash” look by hunting his house from head to toe for each iconic element – down to the mis-matched boot and Converse, which he’d held onto since his middle school days.

For Miles Morales, Mithra combed the city for the most authentic jackets to layer over each other for the perfect personal touch.

And for Spider Gwen, I adapted the ballerina shoe look for something a little more personal – a pair of Transgender Pride Flag Converse that were released for Capitol Pride this past year. The transgender flag is made up of the same colors that Spider Gwen features in the movie: pink, blue, and white. And the Pride Converse also sport black lightning bolts that match the zig-zag embellishments on Spider Gwen’s suit. Since her color scheme and style formed such an essential part of her animation, I was thrilled to be able to incorporate this aspect of my own life into the costume.

Since Spider Gwen is the drummer of a band, I also brought along drumsticks – one of which I caught after it was flung off the stage at an Against Me! concert, and is one of my most prized possessions. The lead singer of Against Me!, Laura Jane Grace, is one of my personal icons and the first transgender role model I had as I was growing up. So not only did they help with costume authenticity… but they really brought home what being a “hero” meant to me.

With preparations underway, we then kept the plan a secret for the entire month. To keep the surprise under wraps, we arrived at the office on Halloween in plainclothes and had to play a bit of musical chairs to avoid detection: finding empty offices we could change in, giving the “all clear” to signal a quick dash across the common area to converge in a guest office, and then finally… the debut.

Our office reveal consisted of us donning our masks, and beginning the long saunter through the office. It was an absolute HIT. The president of our company insisted on a photo to share with his kids (not attached because it was of lower technical quality; but superb sentimental quality!), and after thoroughly entertaining our colleagues, we took to the streets for a very harried photoshoot with a volunteer photographer: our beloved colleague Saleem, who got a free lunch for his contribution. 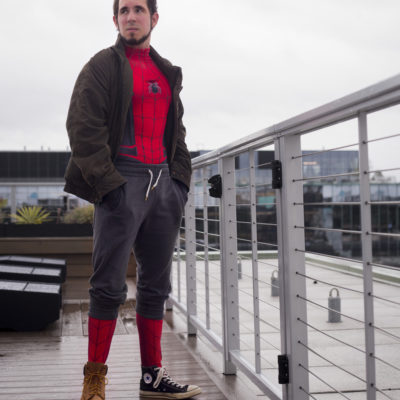 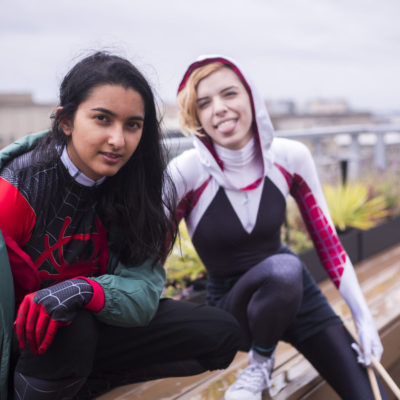 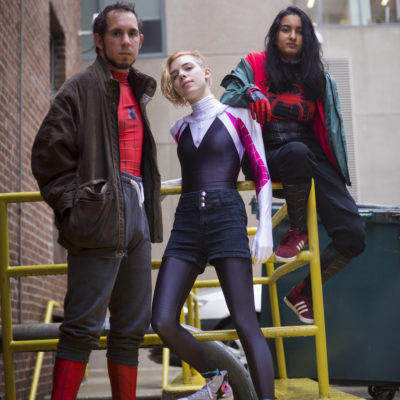 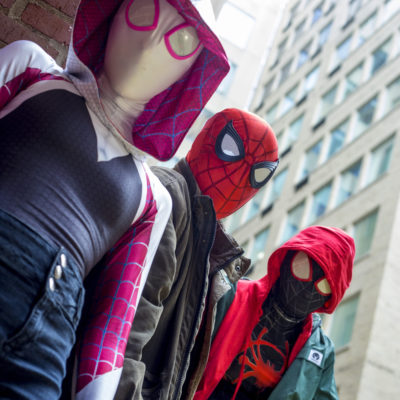 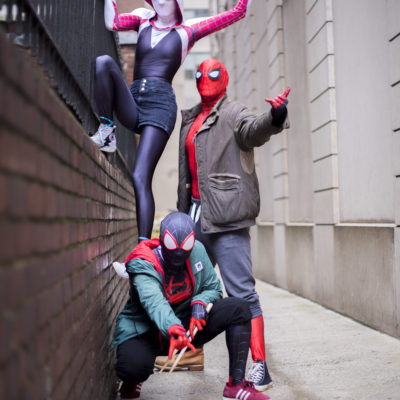 Into the Spider-Verse Spider-Man