Lou Lou is dressed as a can of Chicken Poodle Soup.

The soup can was the starting point for this project. I measured the height and the diameter of a red plastic trash can, and my daughter designed a label, using a Campbell’s Soup can as inspiration. A local copy shop printed the label on gloss paper. The silver glitter tape was added to the top and bottom rims of the trash can to give the appearance of a metal can. I used spray adhesive to attach the label to the trash can. The cream felt was cut into long strips to resemble noodles. I also cut out a few orange squares for carrots, which I glued to some of the noodles. I glued the noodles to the inside edge of the trash can so that they could hang over the outside of the can.

The base of the chicken costume is a white infant onesie. I began by sewing one end of the feather boa to one shoulder seam, and then I tacked the boa around the front neckline, finally ending on the other shoulder. I did the same around the back neckline. I added one more row of the boa around the body, just below the neckline. It wasn’t necessary to cover the entire onesie since Lou Lou is only 5.5 pounds, and only the top half of her body would be seen. I also cut and added one piece of the boa to each sleeve of the onesie.

For the hairpiece, I cut a pice of yellow felt to resemble a beak, and two pieces of red felt for the cone. I sewed the cone pieces together, leaving a small opening so that I could stuff it with the cotton balls. The cone and the beak were then glued to a small rectangular felt base. A small piece of the feather boa was also glued to the base. Using a glue gun, I added a hair clip to the bottom of the felt base.

A folded blanket was placed inside the trash can for Lou Lou to sit on, raising her high enough to be seen over the top of the soup can.

This was a fun project. Lou Lou enjoys the attention she gets as she’s carried around in her soup can! 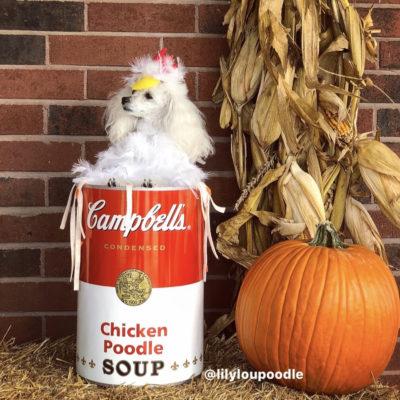