Raz and Tweetz a.k.a Tweakz a.k.a Beakz are an inseparable pair of costumes that I made to be featured in a Halloween music video for the group Shredders.

I worked with director Isaac Gale and designer Syril McNally to build spooky parodies of hip hop Looney Tunes shirts from the 90’s.

Raz is comprised of a cardboard and foam armature overlaid with faux fur and felt accouterments. His pupils are backed with Velcro in order to be re-positioned as necessary for the camera. The jaw can also be pinned closed, or, be puppet-ed (along with the tongue) to add character animation in close-ups.

Two inter-changeable mouth interiors were used to hide the performer, Daniel Hoffstrom. One- completely opaque (for close-ups) and the other was constructed out of a mesh so Daniel could see where he was going. Daniel also wore a face mask with the mesh mouth to disguise his features.

Planning for the high amount of activity that Raz would see evolved into a design that was fairly lightweight and included a bike helmet for some support and control. A bungee cord was added on set to add more support. A better and safer design would include a neck or shoulder brace.

Every performance was a workout. On the hotter days, ice packs and leaf blowers provided some (sort of) relief.

Tweetz a.k.a Tweakz a.k.a Beakz is a grotesque cold-blooded raver. Perfect for a crude hand-painted latex mask. Their look was based partly on the 1993 Illusive Concepts mask, and album art by Vance Wellenstein.

I first sculpted them in Plasticine clay on a wire and plastic armature, molded in plaster, and then slip cast the mask with liquid latex. Along the same lines, the final colors were brush painted instead of an airbrush to give more texture to the mask.

Because of the mask’s size, the inside had to be built up. The original design included a bike helmet interior- like Raz. However, during the fitting, the helmet wasn’t large enough to fit, Kevin Marsh, the performer. We resorted to a pillow instead.

Latex masks are unforgiving. Even with air slits in the front, Marsh would be sweltering after a take of his extreme and intensive dancing!

The rest of Tweetz costume was bleached and altered with raver trinkets, patches, and textile pops.

Together, the two are a menace to Halloween foils everywhere!

The final video and more information about the creation of these costumes can be found on my website. www.josephmidthun.com

Thank you for your consideration! 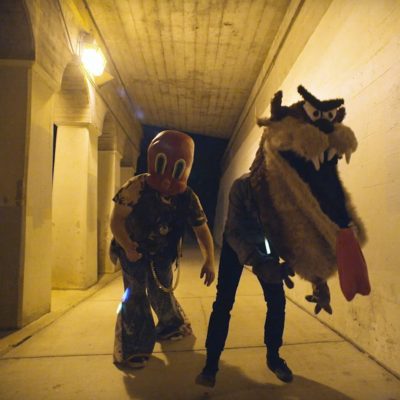 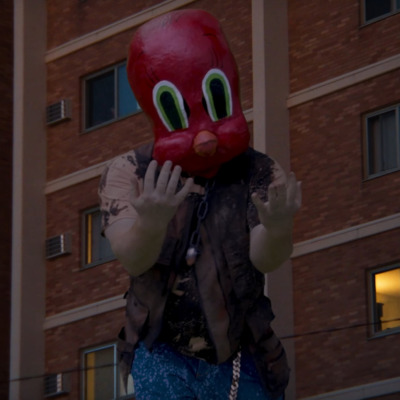 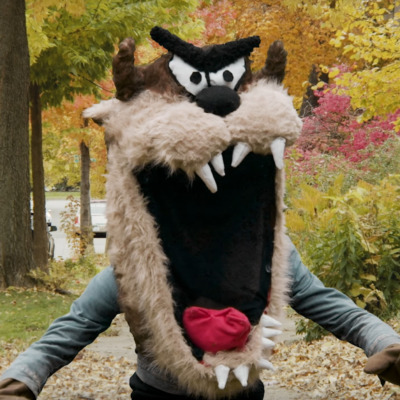 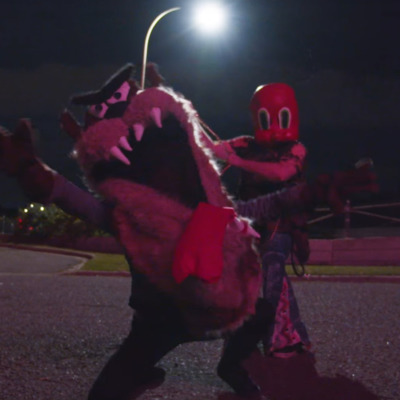