Every year my family tends to go a little overboard on Halloween costumes. As my now teenage son is almost aging out of wanting Halloween costumes (just a little sad), this year my 11-year-old daughter got to choose the theme, and my son just had to play along. Although she hasn’t seen it yet (she doesn’t like scary movies), this year’s idea was inspired by this summer’s movie The Meg. Yep, she wanted to be a giant megalodon shark mouth, and of course, it has to open and bare its teeth so she can scare her friends. Since we needed a family theme, my wife came up with the idea of the four of us making up the parts of a giant shark, my daughter getting to be the head. Now, pulling off a 75 foot long prehistoric beast was probably not feasible, but twenty feet long sounded about right and would still look impressive – after all my daughter’s theme is not the “little-a-don”. Twenty feet also happens to be about actual size for a great white. In retrospect, 20 feet is still huge, and there’s no way I ever want to be caught in the water with one.

As an engineer, I have to model everything in the computer first, so our shark came to life in 3D modeling software. After purchasing the basic 3D model of a shark, it was time to scale it up, figure out how much the mouth was going to open, and also how everyone was going to wear each piece of the shark. At 20 feet, each person was going to get about a 5-foot long section. In order to slice the shark up at good spots, I determined the head section should end just before the pectoral fins, therefore the second section would include the pectoral fins and the dorsal fin. Since that made the second section 8 feet wide and 7.5 feet tall, I decided that one was for me. My wife would get the 3rd section – yep, the “pooper” – and my son would get to wear the tail.

I was a little worried about getting this all done before Halloween, so I focused on my daughter’s head section first, specifically the mechanism to open and close the jaws. To look real, the mechanism would have to allow both the upper and lower jaws to move at the same time. Also, since this was going to be a big costume, I had to make it so my daughter could open it without too much difficulty. I decided on making an internal jaw frame using a counter-weighted mechanism with dual spur gears to let the upper jaw open 45 degrees and the lower jaw to simultaneously open 30 degrees. My daughter could lift up the upper jaw and then the bottom jaw would move down at the same time. The counter-weight made the upper jaw sort of float, so you didn’t have to lift up too much to open it. After modeling it all in 3D to make sure everything fit properly, I made the frame out of PVC pipe and fittings. The spur gears were homemade from MDF (medium density fiberboard), which I could machine with a scroll saw. Precision – they were not, but they just had to work.

The next part was making the shark skins from sheets of 5mm thick EVA craft foam. I exported 3D surfaces from the shark model into software called Pepakura Designer, which creates flat pattern pieces that can then be printed on cardstock and then traced onto the 5mm foam, which I cut with an Exacto knife. The foam pieces were then glued together edge to edge using contact cement to create the 3D shape. Luckily math works, so everything fit (mostly) like the 3D model said it would. I cut ribs of EVA foam sheet to take up space between the PVC frame and the shape of the skin. More foam was cut to make the dual rows of shark teeth (51 in all), the eyes, and the nostrils.
Many hours and test fittings later, it was time to paint. Since regular spray paint doesn’t always work well with foam, I coated the foam first in Plasti-Dip spray paint, which is a rubbery coating. Since the Plasti-Dip already comes in white and gray, and a rubbery surface seemed appropriate for the shark, I just used Plasti-Dip as the finish coat – a lot of it. An added bonus is that Plasti-Dip dries super-fast, which came in handy as time was getting short to get the rest of the shark done before our first Halloween event.

With some padded shoulder straps, the head was done. It ended up being somewhat heavy, but luckily not too uncomfortable when worn on the shoulders. My daughter is always a good sport with my costumes as well.

With the complexity of the mechanism, the head could not be taken apart and collapsed for transport. After a bit of a heart attack that it would not fit into the back of our SUV (luckily it did – just barely), I knew the rest of the shark was going to have to collapse to be able to transport it in our 2 vehicles. I designed a collapsible PVC and plastic tubing frame and harness for the second and third shark sections. The skins could be connected and disconnected from the frame and then “folded” up to fit into the car. I made the pectoral and dorsal fins separate as well, so they could be taken on and off for transport. The tail section was light enough to not need a frame; just some shoulder straps and it folded on itself. That big tail fin was a bit of a puzzle to get into the car, but it fit.

A couple hundred sheets of foam, 2 cans of contact cement, a dozen cans of spray paint, and a good amount of PVC pipe and fittings, the shark was complete. It takes about 15 minutes for one person to assemble everything. And it is BIG. Really big. Like I said before, you don’t want to be in the water with one of these.

Next up, my family got to practice being a shark. We ended up getting pretty good at walking in unison, but we decided not to try to connect the pieces since that could end in disaster. It was easy enough to stand close to each other.

At 20 feet long, 7.5 feet tall and 8 feet wide fin-to-fin, this was pretty much an outdoor costume when all put together (although it somehow fit in my workplace). Luckily the local zoos put on fun Halloween costume events (and have pretty wide walkways), so we got to show off the costume in style. Since it’s pretty hard to miss a 20-foot long shark, we got a lot of attention – and pictures. We even made a big city newspaper. My daughter had a great time baring her shark teeth (frightening a few unsuspecting folks along the way). My teenage son decided it would be a good challenge to be the big second section instead of the tail and ended up having a lot of fun too. All in all, we had a fin time. 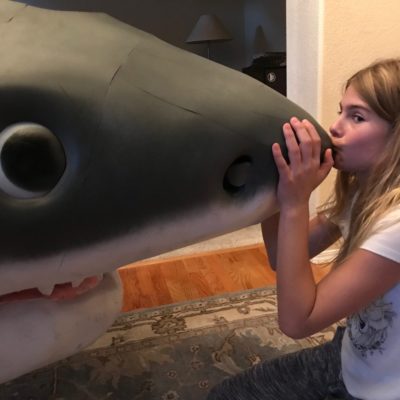 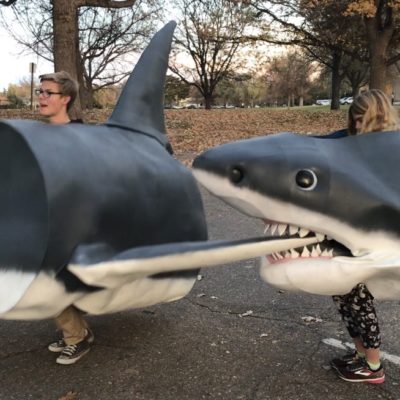 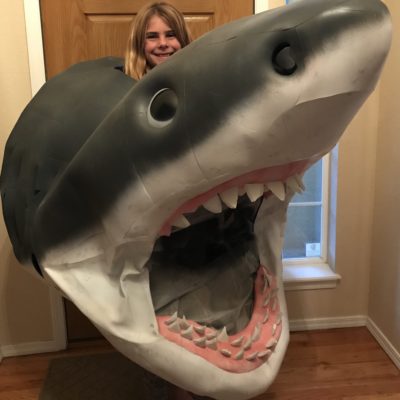 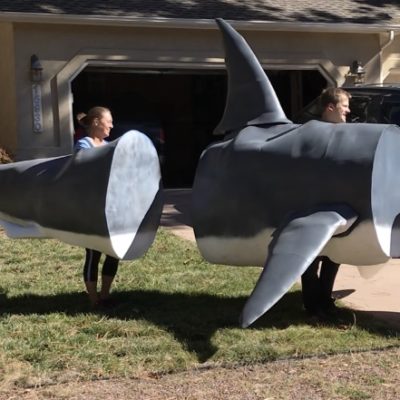 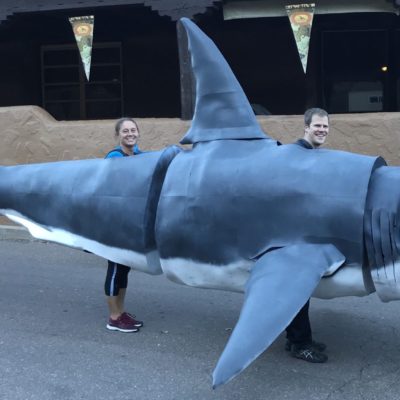