My 9-year-old son wanted to win a Halloween Contest at school. We started researching what we could make. He decided he wanted to be Jack Skellington because he is skinny like Jack and his brother could be Dr. Finkelstein from the movie Nightmare before Christmas. So we began our project in September.

First, we needed to make Jack Skellington and Dr. Finkelstein’s head. We got two balloons and blew them up and started to paper mache several layers over each balloon. After we added approximately five layers of paper mache, we then added a layer of Plastercraft Modeling Plaster to each head. Then the real challenge was making the face.

Let’s start with Jack first. We used modeling clay to shape the eyes and nose after it dried we added a layer of Plastercraft and joint compound. It took days of sanding and adding joint compound until we had the look we wanted. Then, we went on to the teeth which was the same process we had added layers of joint compound let it dry and sand and over and over for about three weeks. Then we started to paint his face and sprayed a sealant. The trick was how was it going to sit on his head. I got the airplane neck rest and put it inside and it worked like a charm.

Dr. Finkelstein’s head was a bit challenging as well. We went to the dollar store and bought a brain mold and duck mouth. I taped the duck mouth to the head and painted the brain mold red. We cut a piece of his head out and inserted the brain mold. Then we began to add modeling clay and joint compound to the duck mouth. That took several weeks as well because you would add joint compound then sand and so forth. We painted lips red and made some teeth out of modeling clay. Finally, we bought some goggles at the goodwill store and spray painted them black. Put it all together and we had Dr. Finkelstein’s head. The trick was how was it going to sit on his head. I got the airplane neck rest and put it inside and it worked like a charm.

Moving on to outfits and shoes. Jack needed to be up high, but my son is only 9. Originally the plan was using stilts but, he broke his arm two weeks before Halloween. So that was out of the question. I went to goodwill and bought a black suit with white stripes. I began to make a template of Jack suit and the began to cut and sew the suit. Regarding the height he couldn’t be on stilts due to his broken hand. So, I went to goodwill bought some old boots and ordered some two-inch EVA foam. I cut four pieces of two-inch EVA foam and attached it to the shoes lifting him up four inches of the ground. We made a platform shoe. Much safer. Finished sewing the suit.

Dr. Finkelstein and I went to goodwill and bought karate white pants, black shoes, and a lab coat. I then went to Jo-Ann Fabric and bought black buttons. I hot glued the buttons to the lab coat. The last trip was to home depot where I bought some black garden gloves. His costume was done.

The wheelchair was borrowed.

I bought a mop stick and painted it black. Then, I bought some electrical foam, painted it black put a wire hanger in it and shape the top of the Jack stick. I got some spider webs and pumpkin lights. Walking stick as done.

The costumes were a hit and he won at school. Happy boy!! 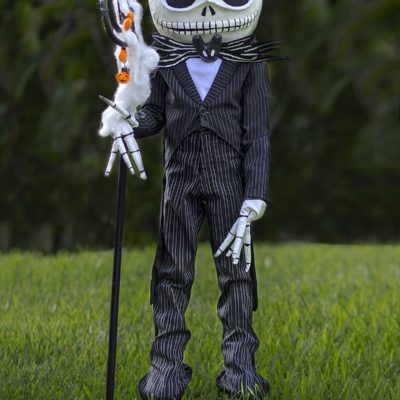 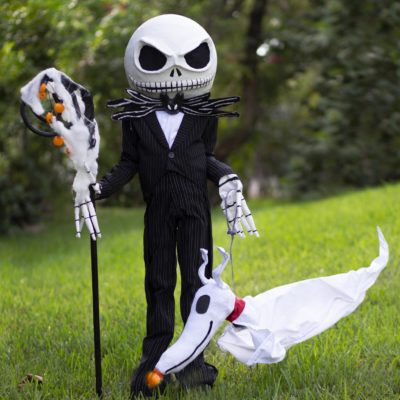 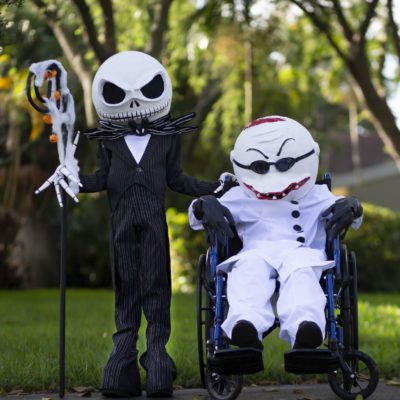 Submitted by: Logan and Connor Vitier

Jack Skellington The Nightmare Before Christmas