You know how sometimes, everything just clicks?

At the start of the year, I had long hair (which has been that way for a long time), but I also had a short beard. I had grown it in the year before as a tribute of sorts to some of my favorite characters of fiction who have lately been sporting some cool facial hair such as Aquaman, Captain America (for “Avengers: Infinity War”), and even Luke Skywalker. Aquaman had a slightly longer beard than Luke and Cap, so when 2019 came around, I let my own beard grow out a bit more to match his. By the time the Spring had come around, Aquaman (the movie) had finished its theatrical run, and I was ready to shave my beard in preparation for the warmer weather to come. Except, here in New York, we had a bit of a lengthier cold-weather stretch this year, so I decided to keep it for a bit longer. By April, I was thinking of how good it was going to feel to give myself a nice, clean shave hopefully by the end of the month.

And then, I went to go see “Avengers: Endgame”.
And then, I saw how Thor looked for much of that movie.
And then, the movie went on to become the highest grossing film of all-time.
And then, I realized that there was NO WAY that I could shave now!

As it turned out however, “Avengers: Endgame” would not be the only big adventure that Thor would have this year. In July, a Nintendo Switch video game called “Marvel Ultimate Alliance 3: The Black Order” had been released, in which Thor had featured as a playable character, looking very similar to how he has looked in the movies, but with the addition of his signature winged helmet from the comics. So, for my Thor costume, I decided to combine the best of both worlds, and do a mixture of “classic” and “modern”. Thus, I went and bought the Thor costume (with the packaging sporting the “Avengers: Endgame” labeling to boot!) and his two weapons at a special price value of about $70.00… or at least, it WOULD have been $70.00 had it not been for me having a LOAD of leftover Amazon Gift Card credit, which brought the price down to nothing!

Being that the costume itself took inspiration specifically from the movies, it did not come with the helmet from the comics, which is understandable since Thor has not worn the helmet in the movies, apart from one scene in his first movie and a similar looking helmet in “Thor: Ragnarok”. So, I had to look elsewhere to find the helmet, which I did on eBay, as part of a more “retro” looking Thor costume, one that likely took inspiration from the comics. About $30 later, and it was mine!
A hundred dollar costume package crunched down to about thirty bucks? I think even Tony Stark, with all of his riches, would appreciate a bargain like that!

And so it was, that I had my Thor costume and accessories, my hair and beard were the right length and color, and Halloween couldn’t come soon enough! In these pictures that you will see, I wanted to include two with the helmet, two without, and one from a Halloween party that I went to in which more synchronicity happened:
In the hopes of capturing a cool Halloween photo, I went to the rooftop of where the party was taking place, I got into my pose, and my friend took the photo… at the precise moment when the wind just happened to pick up, blowing my cape and my hair to create a really cool dramatic effect. It was as though I had summoned the powers of Thor himself right then and there!

So, I hope that you had a very happy, safe, and fun-filled Halloween, and I hope that you enjoyed my recollections on how I, Daniel of New York, transformed himself into the mightiest of the Avengers, Thor Odinson! …or, perhaps in my case, it ought to be “Thor O’Daniel-san”! 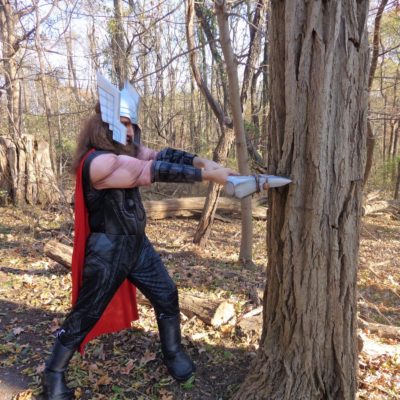 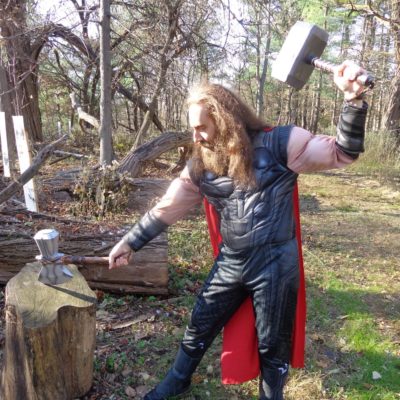 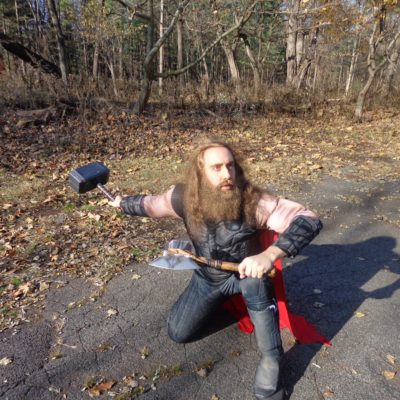