My costume is the necromorph slasher based from the xbox 360 game “Dead Space”. I love this game and love halloween, so I had bought a small bottle of liquid latex..never had any prior experience with using the stuff so I played around. Happy with a patch test I did..I decided to go big or go home! And the necromorph inspired me as a good choice due to the details it had for a good challenge.

A challenge it was. The necromorph took me one month to make in total..everything except the leotard base is made by hand..to put the costume on, can take two to three hours to do. Now a little about the game to explain what a necromorph is.

In the game “Dead Space” scientists looking for other life in other planets happen to come across what is called a Marker, this marker sends out signals that cause the human mind to either go insane and kill themselves or go insane and continue to create more Markers. Not only do the markers make the mind go insane, they also happen to have the ability to rappidly mutate and reanimate dead flesh. This is why the Marker makes you kill yourself. the goal of the game is to stay alive through hoards of different mutated creatures in order to stop the Markers from getting to earth and spreading the new era of Unitology..which is the believe of embracing the necromorph as a new beginning..

So..how did I make this monstrosity of a character?

Well first, I had to make a manican body form to build on to get the costume to my specifications in size..I used duct tape and stuffing for that.

2: The costume itself- the gut
Starting with a leotard as a base, I started to build the burst in the gut, using AC wheather strip foam, paper towel, and liquid latex in the front. This will be were little arms will pop out of the gut.

3: The back
With the back to make the spine I made a mold out of clay, then layered latex on the mold till I had the desired thickness..I did this twice to get the length I needed..using paper towel and toilet paper with latex I attached the spine to the back and used the same materials for the ribs.

4: The collar
From the shoulders up the leotard did not have a collar so I had to make one..I layered paper towel and latex like paper maché till i had the base for a collar. After that I added latex and yarn to get the sinue, muscle, and vein-like texture

5: Main body painting
Using latex mixed with flour I dabbed that over the areas where I needed a “meaty” texture. Then hand painted the areas with latex and paint mix..and topped it with elmers glue for shine

6: the prostetics- the mouth, the eye, and the arms

*mouth piece..using a cast of my face made from plaster, I started with aluminium foil for the base form then built up the desired shape with paper towel and latex..after that I then used yarn and latex for the sinue part of the mouth and formed little pieces of polymorph plasic into teeth and added them to the mouth for extra detail

*eye piece..I started with paper towel and aluminium for the base..then added toilet paper, yarn and latex for the musle effect..I then detailed it with blisters using bubblewrap ..last I used some glow paint for extra detail

*The arms for the gut
Using aluminium foil to make the shape of the arms, I then covered the forms using duct tape..this is so I had a smooth, skin-like finish when layering latex and toilet paper to get the skin effect..after doing that I then used yarn and latex to get a stringy sinue-like look to give a better “bursting” effect and finished off with fake fingernails for realistic detail

*The feet..at last, the last part of this costume I get to the feet..I started with a plain cheap set of heels. While waring them I pulled a sock over the shoe cutting a hole for the heel to poke through, so that I could make boots with a tighter fit around my ankle..Then using duct tape I covered every part of the sock with duct tape still using my own foot as a form to work on..I formed aluminium foil into roles and attached I to the shoes to make I look more like a mutated foot than just regular heels..like I did with the arms I layered paper towel and toilet paper with latex to get skin..then with the feet only, I used hot glue to create a raised vein-like pattern..then painted and shaded to get a grosser realistic look..now both with the arms and the feet I made sure to make them differnent I shape and mutation to add to the realism of the effect for the necromoph look.

I am self taught I sxf makeup and in art..this is my first big project..though I had made this costume last year, I did make the eye piece for it this year..I have gotten about 20hrs of ware time out of this project/costume in total so far, and plan on getting another 8hrs out of it again this holloween. in total I have about $150 invested in making this costume 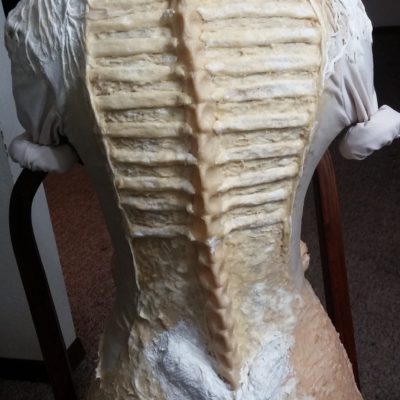 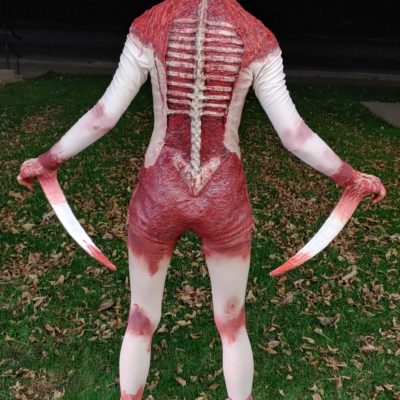 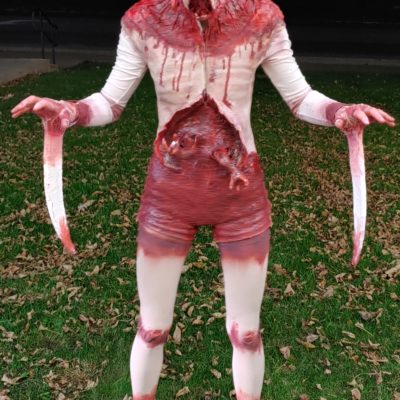