Every year my buddy Andy and I like to do an elaborate costume that includes some sort of vehicle or structure. This year, in honor of the 50th Anniversary of the Haunted Mansion, we decided to do the hitchhiking ghosts at the end of the ride. Many people have done the ghosts before but no one has done the ghosts in the “Doom Buggy”. At the end of the ride you are warned about hitchhiking ghosts and you come across a bunch of mirror and when you look in the mirror it looks like a ghost is there with you in the middle of your buggy. The idea was to make it so people can get into the buggy with us on either side to take pictures.

The buggies were basically made with cardboard and duct tape. We bought 3 king/queen mattress boxes and cut out one side leaving a flap at the top. We then curved the box a little and taped the flap over the top to hold the curvature and create the rounded top. We then added a long 3 inch wide strip of card board to each side. They duct taped the whole box. Using the other side of each mattress box we did a similar this, though half the size to created the front of the buggy. We used pvc pipe to create the safety bars and duct taped the whole front. We used a mesh material to make the three speakers that sit inside at the top of the buggy.

Now the structural engineering of how we wore them was a little tricky. Using dollar store backpacks we cut slits in the back of each buggy based on our individual height (we are all different heights and we wanted the buggies to look the same height) and we ran the top and bottom parts of the backpack straps through the back of the buggy and the refastened them on the inside of the buggy. This way we are basically wearing the buggy as a backpack. Then taped dollar store shelving brackets to the inside of the buggy near our waist and taped pvc pipe to that so the pipe was perpendicular to the buggy. This is what we would connect to the front panel of the buggy. On the inside of the front panel we also taped 2 shelving brackets. Initially the plan was to tape pvc connectors to the front panel and just pop them on to the pipes that were sticking out from the back of the buggy and thus complete the buggy but this proved to be difficult to take on and off if we wanted to “open the door” of the buggy to let people in. So instead we put a bar across the two brackets on the inside of the door and then rested that bar across the two pipes that were sticking out from the back. To make sure it didn’t slide off we added elbow shaped connectors to the two pipes from the back facing upwards. This all worked well however the weight of the door resting on those pipes started to tile the whole buggy forward. We then had to run a thin rope through the back of the buggy and tie it around our waste to keep the back of the buggy upright. This all worked perfectly and the buggy hung from us hands free and if we wanted to take the door off to let people pose inside and hold the door it was easy.

The costumes themselves we bought at thrift stores and Goodwill. We bought white jackets, pants, shirts, hats, a bag, and a ball and chain. Then using fabric paint sprayed them mint colored to give that ghost look. We ordered the beard and wigs online as well. Finally for the makeup we just used two different colored blues and a white to give us the ghost look and used blue dish gloves for our hands. We didn’t want it to be obvious how we had the buggies attached to us so we cut slits in the back of the costumes to run the backpack straps through them and the rope so nobody could see them.

Overall the costume was a huge success and was very popular at the Annual West Hollywood Halloween Carnival. The total cost for three buggies and costumes was around $350. 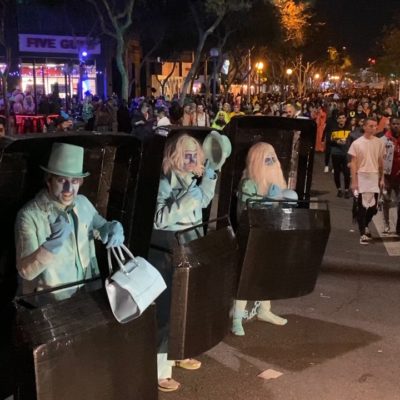 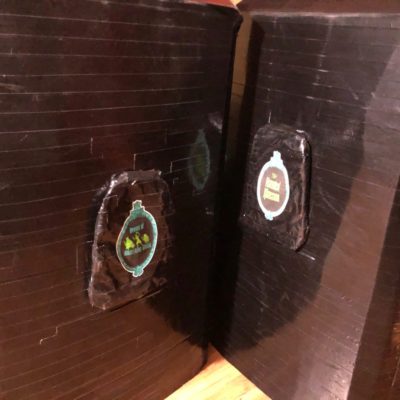 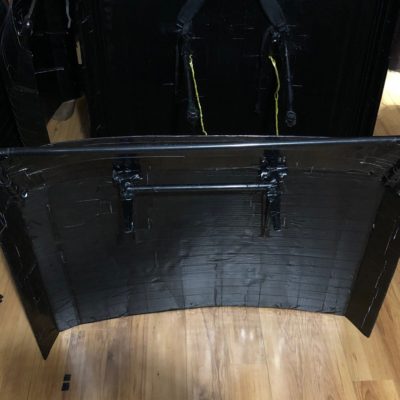 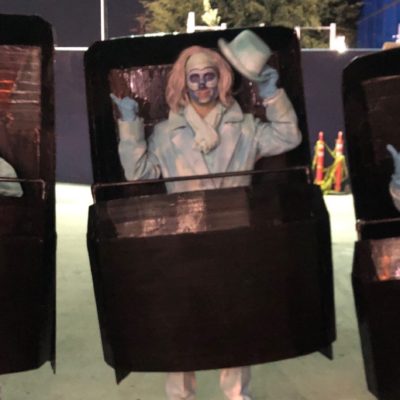 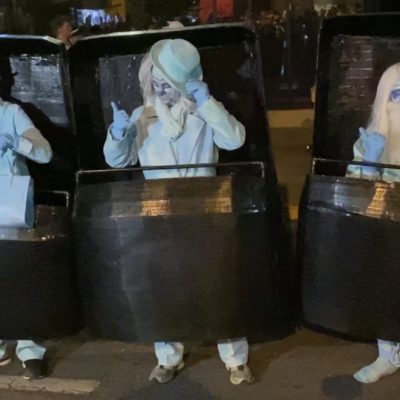