AIN’T NO LAWS WHEN YOU’RE DRINKING CLAWS!!! This phrase along with my love for the tasty adult beverage White Claw inspired my 2019 Halloween costume White Claw Monster!

I usually stick to creating costumes from some of my favorite childhood movies or cartoons. This year I decided to change it up and do a “trendy” costume for the first time. I was racking my brain for a great original idea and was coming up with ideas like IT the clown and the new Joker which are both very trendy costumes right now. Still, I wanted to do something more unique and original.
I thought of all the things I did this summer like going to BBQs, Movies, Parties, and hanging out with family and friends. As I was thinking of all these events, I realized there was a trend at all these events that tied them all together……White Claw! At that point, I decided my 2019 Halloween costume would be White Claw.

Now that I had my trendy idea, I needed to think of a cool way to turn White Claw into a fun and original costume. I started by focusing on the name White Claw…. when I think of White Claw, I imagine a monster with giant white furry claws, hence the name White Claw. My final plan was to build a fun-loving monster around a White Claw can.

The costume took around 5 weeks to build working on the costumes for a couple of hours here and there. The main most expensive pieces were water resin tube (ouch shipping) and the faux fur.
I was happily impressed with the final monster look and overall feel of the costume. The face ended up being a combination of Sulley from Monsters Inc and the Abdominal Snowman. At one point I almost designed the face to look like the wave label from the can but luckily my wife stopped me and suggested it should be a fun goofy face.

With everything completed the White Claw monster was ready to take a flight to its natural habitat….a bar ? Walking into the bar the costume immediately drew attention mainly because of the giant colorful wings that made the costume look 12ft tall. Everyone seemed to know White Claw, but it took them a minute to realize it was a White Claw monster. The fun goofy face made everyone smile as they ran up to take pictures. The giant claw hands were great for pictures because it made it look like I was picking the person up when I put my arm around them. Almost everyone chanted the famous phrase “Ain’t No Laws When Drinking Claws”, and I would turn around to show them the phrase on the back.

The final surprise was flipping on the strip lighting on the wings which lit up the whole costume and attracted people’s attention to the costume like moths to a light. Overall, I had an absolutely great time wearing the costume and seeing people’s reactions! This made Halloween 2019 the best year yet!

My only regret is I only wore the costume only twice. Being a trendy costume who knows what people’s reactions will be next year if I decide to wear the costume out again. Luckily, I’m entering the Costume Wall online costume contest and the White Claw Monster costume can live on forever online ?

Main Body – I started by researching garbage cans at local hardware stores but couldn’t find a white garbage can in the right slimmed-down shape. I moved online to chemical websites and found a great water resin tube that was the right shape and color to resemble a large White Claw can. I choose a plastic bin over a cardboard tube because I would need support for my wings. I cut three holes in the tube for my head and arms, so the tube could somewhat easily slide on and off of me. The White Claw label was a poster I had made. Some other features not pictured are the alien from the toy story captioning “The Claw”, and there were 5 claw marks on the back of the can along with the phrase “AIN’T NO LAWS”.

Head – I started the head using a 10” cardboard cement tube. I attached a small fan to the front of the head and wrapped the head in 1” foam using hot glue to secure the foam to the head. Next, I wrapped everything in masking tape and began to slowly cut out foam pieces to design the head. Once the face was shaped using foam pieces every was wrapped in masking tape and 10 layers of paper mache were added. Once every hardened I glued down faux fur to the whole head. The eyes are made from clear ball Christmas ornaments that open. The teeth are made from a white bucket. Finally, I added some cool light-up devil/goat horns I found online to really make it POP!

Wings – Possibly my favorite part of the costume…I always wanted to make something with wings! The wings were made from ½” PVC piping. I used a gargoyle statue picture I found online to help with the outline of the wings. The base PVC piping was covered in foam insulation tubes and faux fur was glued to the tubes. The inside of the wings was made from some amazing colorful stretch fabric. I cut some 2” holes in the back of the water resin tube and used ½” PVC piping to create a backbone for the wings to be attached. The flexibility of the PVC allowed the wings to be opened and closed which helped for walking around in tight spaces. Finally, I added some remote-control color changing strip lights to make them really POP!

Arms/Legs/Feet – The arms and legs were made using faux animal fur from the local fabric store. I sewed the first on to existing pants and shirts. I was originally going to design slipper feet but ended up finding some cool looking monster feet online. 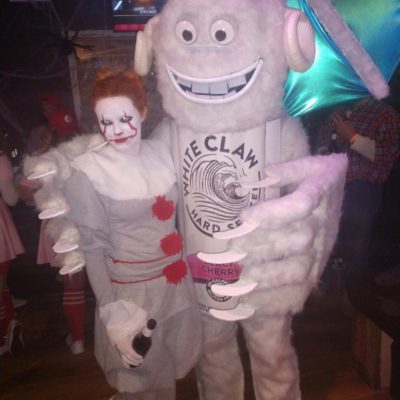 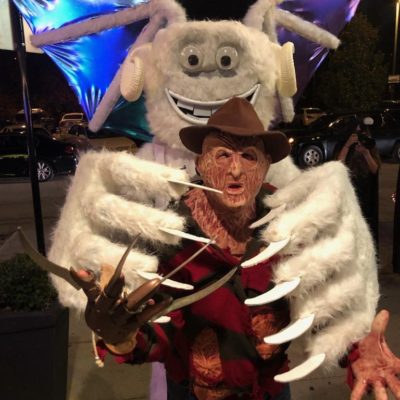 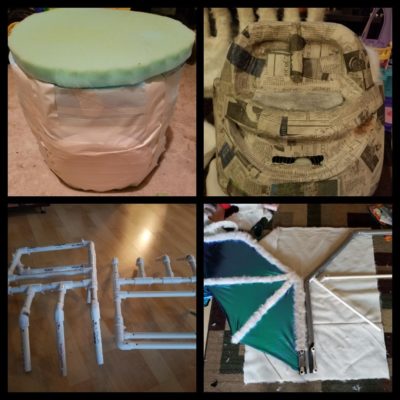 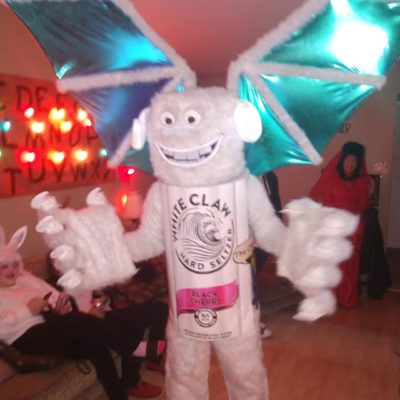 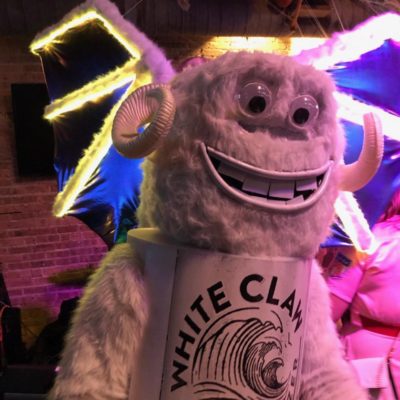